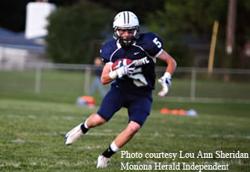 Wisconsin Sports Network and WisSports.net are proud to announce Monona Grove senior Zach Zweifel as the 2010 recipient of the Al Toon Award as the most outstanding senior wide receiver in Wisconsin, part of the WSN Senior Football Awards.

Monona Grove went undefeated in the regular season, winning an outright Badger-South Conference championship and advancing to Level 3 of the WIAA playoffs. On the season, Zweifel caught 56 passes for 954 yards with 14 touchdowns. He also was a threat returning kickoffs and punts, with 213 combined return yards in limited opportunities (many teams simply kicked away from him). Also an outstanding cornerback, Zweifel picked off three passes this year and was a first team all-conference choice last season at defensive back.

Zweifel had some of his biggest games against MG's toughest opponents. In the regular season opener against defending Division 3 champion Reedsburg he posted 4 catches for 139 yards and a score. In the opening playoff game on a windy night against Sussex Hamilton, he pulled in 9 receptions for 125 yards and a score. He saved the best for last, catching 10 passes for 110 yards and 2 touchdowns in the Silver Eagles' Level 3 loss against Waunakee.

The award is named after Al Toon, a graduate of the University of Wisconsin who still ranks in the top three or four of almost all game, season, and career receiving categories. Toon was a first-round draft choice by the New York Jets, who led the NFL in catches in 1988 with 93. Injuries forced him to retire early from the NFL, but he has been a fixture back in the Madison area for many years.