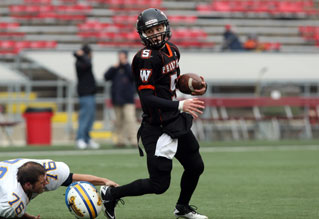 Wisconsin Sports Network and WisSports.net are proud to announce West De Pere's Jay Tollefson as the 2011 recipient of the Dave Krieg Award as the most outstanding senior quarterback in Wisconsin, part of the WSN Senior Football Awards presented by Taco Bell.

Tollefson is the ultimate playmaker from the quarterback position, able to take over a game in numerous ways. He led the Phantoms to the Division 3 state title last season and a return trip to state this year.

Despite rarely throwing the ball in the second half of games as West De Pere has dominated so much this year, Tollefson has managed to complete 99 of 178 passes for 1618 yards and 18 touchdowns. He is equally as deadly with his legs, where he has more than 1300 yards with 25 rushing touchdowns.

He has eight games this year (including all 4 playoff games) of more than 100 rushing yards and seven games of more than 100 passing yards. In a Week 5 win over Bay Conference runner-up Luxemburg-Casco, Tollefson completed 11 of 11 passes for 197 yards and 3 touchdowns while adding another score on the ground. He was recently named a WFCA First Team All-State selection.

Finalists for the award were Tollefson, John Eagan of Wautoma, Joe Greif of Marquette, Chris Nelson of Wilmot, Jake Nelson of Milwaukee Lutheran, and Nate Otto of Appleton North.

The award is named after Dave Krieg, a graduate of D.C. Everest High School who went on to star at Milton College and later in the National Football League. Krieg ranks in the Top 12 in NFL history in career pass attempts, completions, passing yards, and passing touchdowns. He was selected to the Pro Bowl three times in his 12-year career.