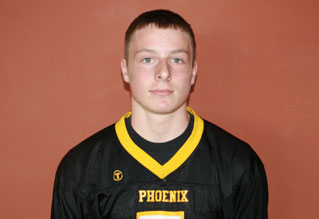 Wisconsin Sports Network and WisSports.net are proud to announce Montello/Princeton/Green Lake's Matt Sosinsky as the 2011 recipient of the Al Toon Award as the most outstanding senior wide receiver in Wisconsin, part of the WSN Senior Football Awards presented by Taco Bell.

Sosinsky leads the state in receptions (74) and receiving touchdowns (22) and is second in receiving yards (1269) this season, nearly capturing his second straight receiving Triple Crown. He broke the all-time receiving touchdown record back in Week 4, and finished his illustrious career with 51 receiving scores, well ahead of the previous record of 39.

With two touchdown catches in the Phoenix's Level 1 loss to Wautoma, he also broke the single-season touchdown reception record, finishing 2011 with 22. He is second on the career receiving yardage list with 3544 yards and third in receptions with 206.

"Virtually every team we faced this year had a game plan to limit Matt's catches," Phoenix co-head coach Harlan Leusink said. "All played with one person dedicated to him defensively, with a safety slid over the top. Some even had another linebacker that was switched to his side of the field to protect against the slant."

On Monday Sosinsky was named a First Team All-State selection by the Wisconsin Football Coaches Association.

Finalists for the award were Sosinsky, Brett Esser of D.C. Everest, Kevin Folker of Milwaukee Lutheran, Matt Misiewicz of Marquette, and Jordan Roosa of Mosinee.

The award is named after Al Toon, a graduate of the University of Wisconsin who still ranks in the top three or four of almost all game, season, and career receiving categories. Toon was a first-round draft choice by the New York Jets, who led the NFL in catches in 1988 with 93. Injuries forced him to retire early from the NFL, but he has been a fixture back in the Madison area for many years.