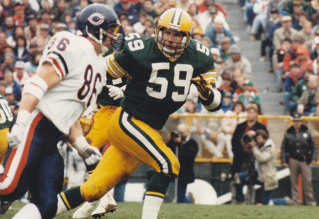 John Anderson has been selected to represent the award given to the most outstanding senior linebacker in the state. A graduate of Waukesha South High School, Anderson received All-Conference and All-State recognition on both offense and defense. He would go on to star for the University of Michigan for four seasons, where in addition to linebacker he was the team's punter as well. At Michigan he earned All-Big Ten honors twice and was a second team Academic All-American two years as well. He would play in two Rose Bowls and one Orange Bowl as the Wolverines won or shared the Big Ten title three of his four years in Ann Arbor.

Anderson returned home to play professionally when he was drafted in the first round (26th overall) by the Green Bay Packers. He played 12 seasons in the NFL, all with the Packers. Upon his retirement he was the Packers all-time leader in tackles with 1,020 (the Packer only have stats compiled since 1975) and still holds that record today. He was named to the NFL's All-Decade team for the 1980's and the Packers Hall of Fame in 1996.

After spending several years in broadcasting following his retirement from football, Anderson has moved into teaching, working in the Brookfield Academy school district. In 2009 he was hired by Carroll University in Waukesha and currently serves as an assistant coach with the team's linebackers.