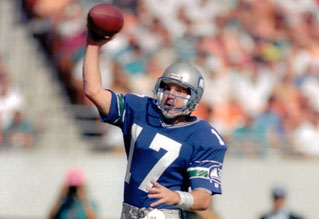 Dave Krieg has been selected to represent the award given to the most outstanding senior quarterback in the state. A graduate of D.C. Everest High School, Krieg would go on to one of the most storybook careers in football. He got his start in college as the 7th string quarterback at now-defunct Milton College, an NAIA school in Milton, Wisconsin. After working his way up the depth chart, Krieg entered the lineup in the fourth game of the year due to an injury to the starter, and never looked back. Signed as an undrafted free agent by the Seattle Seahawks, Krieg rose to the starting position toward the end of his second season.

Krieg played 12 seasons with Seattle, re-writing the team’s passing record book. He teamed with receiver Steve Largent to form one of the most dynamic passing games in the NFL during the 1980’s. Krieg led the Seahawks to the playoffs in 1983, 1984, 1987, and 1988. He was selected to the Pro Bowl in 1984, 1988, and 1989. He would go on to play seven more seasons split between the Kansas City Chiefs, Detroit Lions, Arizona Cardinals, Chicago Bears, and Tennessee Oilers. Krieg appeared in the playoffs with the Chiefs in 1992 and 1993, and with the Lions in 1994.

Dave still ranks in the Top 12 in NFL history in career pass attempts, completions, passing yards, and passing touchdowns. He was selected to three Pro Bowls, led teams to the playoffs seven times, and was inducted into the Seattle Seahawks Ring of Honor in 2004. Dave is currently a motivational speaker with interests in a number of charitable causes.