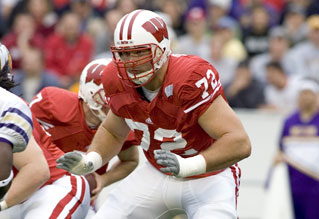 One of the most recognizable and decorated Badger players during the Badgers football renaissance that began under Barry Alvarez, Joe Thomas exemplifies the strong tradition of offensive linemen in the state and is an excellent namesake for the most outstanding senior offensive lineman award. Thomas was the epitome of a true student-athlete at Brookfield Central High School, where he lettered all four years in football, basketball, and track. He was also named to the Honor Roll all four years, in addition to garnering U.S. Army Academic All-American honors. He was selected as the Wisconsin Football Coaches Association Defensive Player of the Year his senior season. Ranked among the country’s top linemen in his class, Thomas chose to attend the home state University of Wisconsin.

Thomas played four years at Wisconsin, making 37 starts at left tackle in some of the most productive offensive seasons in school history. He won the Outland Trophy, presented to the nation’s top lineman, in 2006 and was an Associated Press All-American. He continued his strong performance in the classroom as well, receiving Academic All-Big Ten honors twice. Thomas was drafted 3rd overall in the 2007 NFL Draft by the Cleveland Browns. He was been selected to the Pro Bowl ten times in his 11 years. Thomas’ wife Annie is a former women’s basketball player at Wisconsin.

Joe has chosen to support Special Olympics of Wisconsin. Special Olympics Wisconsin (SOWI) is a statewide organization providing year-round sports training and athletic competition in a variety of Olympic-type sports for children and adults with cognitive disabilities, giving them continuing opportunities to develop physical fitness, demonstrate courage, experience joy and participate in the sharing of gifts, skills and friendship with their families, other Special Olympics athletes and the community.