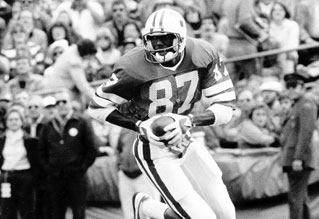 Al Toon has been an important figure in University of Wisconsin athletics, especially football, in the last 30 years, and is a great person to represent the outstanding senior wide receiver award. Toon actually grew up and went to high school in Newport News, Virginia, but joined the University of Wisconsin football team in 1982. He quickly added his name to the UW record books, putting together three outstanding seasons for the Badgers. When his Badger career came to an end following the 1984 season, Toon held the school records for career receiving yards, career catches, career receiving touchdowns, single-season receiving yards, single-season catches, single-season touchdowns, and most receiving yards in a game. While many of those records have been surpassed, Toon still ranks in the top four or better in most categories. As if he wasn’t busy enough, Al was also a two-time All-American triple jumper on the Badgers track team.

Following that illustrious Badger career, Al Toon was the 10th overall selection in the 1985 NFL Draft by the New York Jets. He proved to be a dynamic force right away, with 662 receiving yards his first year followed by 1176 the next. His best season was 1988 when he led the NFL with 93 catches. A series of injuries forced him to retire from football earlier than he would have liked, at age 29. Al returned to the Madison area and is a local business owner who has served on numerous board of directors. His son Nick was a standout player at Middleton High School, the University of Wisconsin, and is now in the NFL; daughter Kirby is a member of the UW volleyball team.

Al has chosen to support the Boys & Girls Club of Dane County, a club designed to inspire and enable all young people, especially those from disadvantaged circumstances, to realize their full potential as productive, responsible and caring citizens.