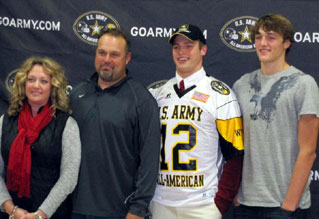 Wisconsin Sports Network and WisSports.net are proud to announce Wisconsin Rapids' Vince Biegel as the 2011 recipient of the John Anderson Award as the most outstanding senior linebacker in Wisconsin, part of the WSN Senior Football Awards presented by Taco Bell.

"Vince is the best athlete I have ever coached," Rapids head coach Tony Biolo said of his star linebacker. "These types of players only come around once in a lifetime."

He committed to Wisconsin back in April over offers from across the country. In the regular season totaled 150 tackles, 5 sacks, 18 tackles for loss, 4 blocked kicks, 4 forced fumbles, 2 fumble recoveries. Biegel was selected to participate in the prestigious U.S. Army All-American game in San Antonio in January.

Finalists for the award were Biegel, Conor Cannon of Marquette, Bennett Goff of Middleton, Jordan Gruettner of Muskego, Clint Nievinski of Mosinee, and Nathan Taylor of Monona Grove.

The award is named after John Anderson, a former Waukesha South standout who received All-Conference and All-State recognition on both offense and defense for the Blackshirts. He would go on to star for the University of Michigan for four seasons where he twice earned All-Big Ten honors. Anderson would be selected by the Green Bay Packers in the first round of the 1978 NFL Draft and go on to a successful 12-year career. Upon his retirement he was the Packers all-time leader in tackles with 1,020 (the Packer only have stats compiled since 1975) and still holds that record today. He was named to the NFL's All-Decade team for the 1980's and the Packers Hall of Fame in 1996.